The educative formation of folk costumes

Collecting, exhibiting and renewal at the Tyrolean Folk Art Museum and in the work of Gertrud Pesendorfer (until 1938) 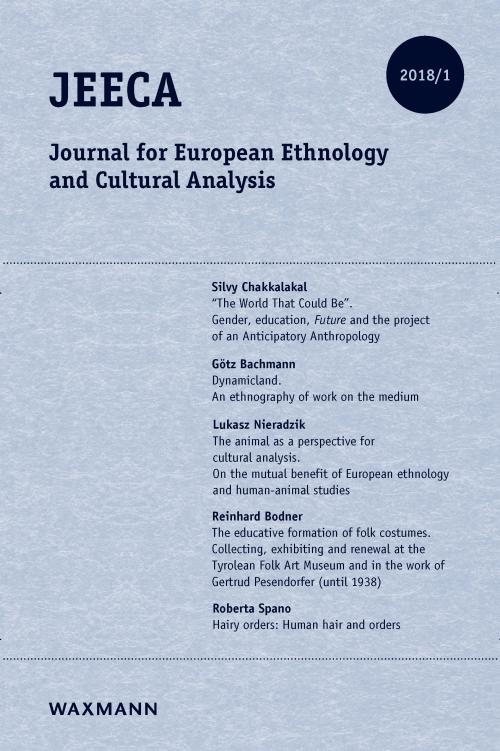 The paper discusses the transition from the conservation of folk costumes to their adaption to contemporary circumstances in the multilingual border region of Tyrol since the second half of the 19th century. Particular attention is paid to the Tyrolean Folk Art Museum (Tiroler Volkskunstmuseum) in Innsbruck that was one of the major arenas and actors in this field. Founded in 1888 as an arts and crafts museum, it oriented itself towards an ethnicized concept of folk art (Volkskunst) after 1900. It was opened in 1929 as a “monument for the unity” of the regions north and south of the Brenner Pass that had been divided between Austria and Italy since the Treaty of Saint-Germain in 1919. The paper analyses different versions of folk costume (‘Tracht’) corresponding to the changing museum concepts until 1938, when Austria was annexed to the German Reich. ‘Tracht’ appears as a questionable model for modern arts and crafts, as an identity marker and advertising material for tourism, as a potential exhibit within planned but not realized museums, as costumes on loan and as a model for sewing courses. Looking at the interwar period, the paper focuses on how Gertrud Pesendorfer (1895–1982) took over responsibility for collecting, exhibiting and renewing ‘Tracht’ in the museum. After 1938, she was one of the official functionaries in this field. The paper argues that ‘Tracht’ was created by a set of material practices and styles of thinking within and outside the museum and closely linked to economic and political interests. Particular emphasis is placed on the visual dimension of ‘Tracht’ connected to the museum’s collection of folk costume images (Trachtenbilder) in its relationship to the concept of Bildung combining aspects of formation and education.